My adventures around the world

We did so much in Berlin today I feel as if we have covered most of the city. We began the day by visiting Charlottenburg Palace, a short train ride out of the centre of Berlin. Upon arrival, we were disappointed to discover most of the palace was under construction. However, we could still walk around the immense grounds for free. If you are looking for a cost-free outdoors activity in Berlin I would recommend visiting. The palace itself is beautiful and grand, it’s hard to imagine this ever having been someone’s home. It allows an insight into another life and another time. This resulted in Lucy declaring that it was the ideal place to live and was to be her new home, she is now to be known as princess Lucy. Ensuring a game for the rest of the day in which we all selected our own palaces from the grand building in Berlin. 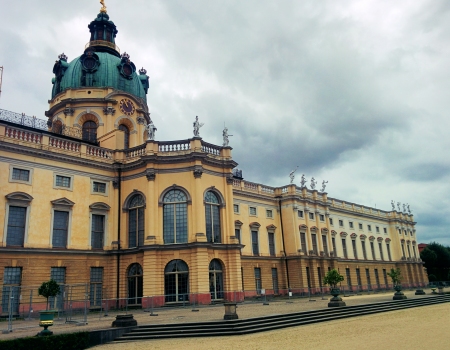 We only thought it would take a couple of hours, but ended up spending most of the morning exploring around the grounds and ignoring the bad weather. With lots to see from the Belvedere Teahouse, the Mausoleum and the iron bridge near the carp pond dating back to 1800s, I would advise taking at least a half-day. 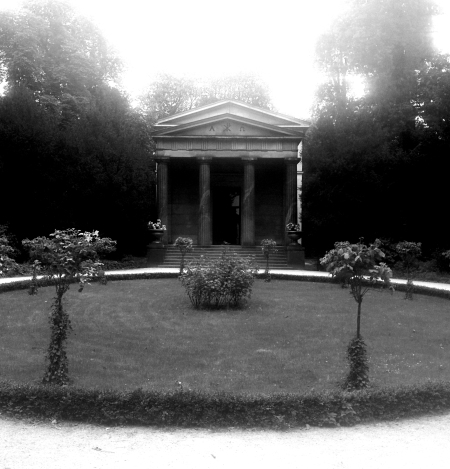 With all the rivers and streams we maturely played pooh sticks at every opportunity.

Getting back on the S Bahn we arrived at the Jewish Museum. We sat outside and ate our pre-made lunch (poor students) at which point Harrie realised she had made pasta and forgotten a fork to eat it with. Beth proceeded to get creative with tinfoil, a hair bans and a pen and made Harrie a spork to eat her pasta with.

The Jewish museum was a very interesting place if a little odd. It was an extensive maze and at different points, disturbing, moving and slightly boring. The architecture of the building was interesting as we learned from Beth, it’s designed in the shape of a fragmented star of David. This resulted in it being an incredibly confusing maze, never really sure if you were anywhere near the end.

I don’t know what I really expected from the museum, I think I expected it to be focused more on the holocaust, when in fact it was more about the history of the Jewish people and their identity. The beginning of the museum was supposed to imitate the experience of the concentration camps with an example death chamber. It did the job, as I’m very claustrophobic and could hardly set foot it in. 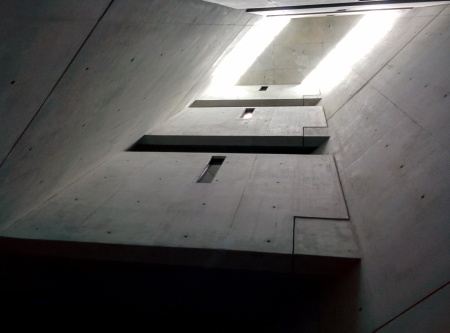 I liked the concept of laying out a museum to reflect its content. It was disturbing, however, I feel it was necessary as it made it far easier to connect with the content and understand the real horrors of the holocaust.

The rest of the museum was the entire history of Jews. Which was interesting, to begin with, but as the museum seemed never-ending. We decided to lighten the mood by participating in all the children’s activities.

And I mean all the children’s activities from Lucy almost getting stuck crawling through children sized archways. To Beth using the children’s colouring table to draw the Brandenburg gate. Then all of us sitting in the children’s section drawing and colouring in. I think we amused a lot of people around us and got some very strange looks.

One of the most amusing moments of the day was when Harrie and Lucy were following a challenge on the wall to rearrange the Hebrew letters in the correct order. Only after a slightly irritated Jewish woman got involved did they realise that it had already been done before them and they had been in the right position before they began.
After spending almost three hours getting lost in the museum, we decided to visit the East Side Gallery of the Berlin wall and look at the graffiti ‘art.

Some of it was amazing and controversial, whilst others were extremely odd featuring some bizarre things. Made even stranger by other people graffiti over it.

Yesterday our tour guide mentioned a food market that was on in the evening, so we decided to go check it out. Venturing into not the nicest area in Berlin with an hour to kill, we continued our childish day and ended up in an aquatic-themed children’s play park. We climbed to the top of a giant octopus and chilled for a while. Whilst witnessing an odd couple opposite having a photoshoot in a doorway (Germany is a strange place) it wasn’t even a particularly lovely doorway. We eventually found ourselves surrounded by children and thought it was time to leave. At this point, I realised how terrible my climbing skills are as the six-year old’s made it down faster than I did.

We then eventually found the food market, we realised our tour guide told us the wrong time, and it had started two hours before. It was really cool and full of good food, if slightly busy. If you’re looking for a traditional German market, then this isn’t the place for you as it was more of a Turkish market (there are a high population of Turks in Berlin.) I was disappointed that I was unable to find currywurst or strudel. Although the food was delicious and the atmosphere was great. If you’re in Berlin on a Thursday make sure you visit the Markthalle Neun in Kreuzberg. I even managed to get a bag to replace my broken one along with a pack of minion cards, which came in useful later on in the night.

Later that night we decided to go out for drinks, after looking at a couple of places we decided on a Singapore cocktail bar on the same street as our hostel. This bar faced a hotel with huge windows. In one window appeared a shirtless man, who clearly knew we could see him and was flaunting around. A shirtless man quickly followed a shirtless woman. It then proceeded to get awkward as the waiters realised that we were watching the show across the road and started making some strange jokes. The shirtless woman then realised the restaurant had been watching them for half an hour and shut the curtains. We spent the rest of our night creating our own card games with minion cards, including the rule that you must act out the minion’s action, this resulted in even more strange looks. Walking back to the hostel we ran into a group of guys from Sheffield, who recommended a bar crawl happening the following night. It was by the same company that we did our free walking tour with so were interested in finding out more about it.